How To Play Major And Minor Guitar Scales

In this lesson I will teach you how to learn Major scales on guitar (and memorize / remember them) over the entire guitar fretboard. The information in this lesson is essential to acquiring a command over the guitar neck. Knowing how to play guitar scales will make you a better lead/solo player as well as give you the edge on chords.

TL:DR Scroll down for animated GIF

New! Be sure to check out the Virtual Piano

Prerequisite reading:
Learn the notes of the fretboard.
Learn to play guitar scales for beginners.

Introducing the A Major scale for guitar

For this lesson we will use the A Major scale. A Major just so happens to fit nicely on the fretboard that works well for our demonstration. Once you learn to play one Major scale, you can play all Major (and minor) scales in every key.

The A Major scale pictured below:

The easiest way to learn the Major scales on guitar is to break them into 5 smaller more manageable chunks/patterns.

Reload the page to Restart Animation

Tips for learning to play the 5 patterns

* The animation is a Gif image so save it to your device or repost it somewhere on the web to make sure you will always have it handy. Just right click and save as!
* Learn each pattern individually before moving to the next.
* The picking in the animation uses economized alternate picking. Which means down/up or up/down picking but down/down or up/up where possible.
* The animation only shows you how to play each pattern in ascending (up) order. But you should learn them in descending order (down) as well. Just reverse the direction (reverse pick direction too) but keep the same fingering for descending.
* Although not contained in boxes in the animation, you should know that where pattern 5 ends, pattern 1 begins. Also at pattern 1 (at the 4th fret), pattern 5 occurs before it at the 2nd fret.

Want the guitar TAB instead?

For those of you that don't feel like watching the animation, below is the guitar TABs for the 5 box patterns that also shows the suggested picking and finger numbers. 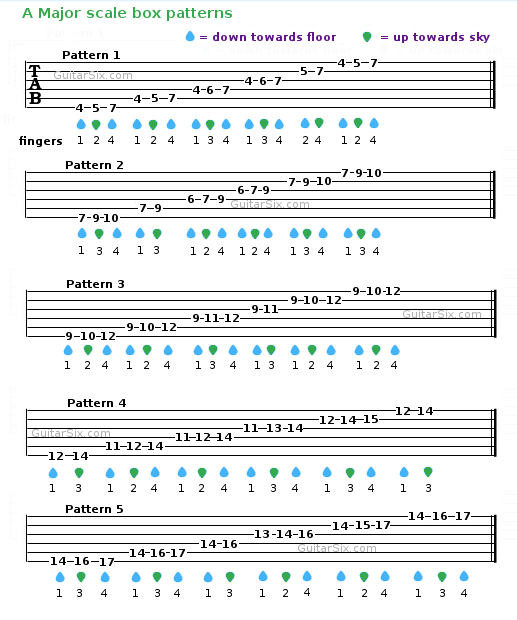 Once you have learned all five patterns you can move all 5 patterns as a whole to new keys. The notes change but the patterns are the same.

Move it up five frets to be in C Major. Below is a picture of what C Major looks like with patterns outlined:

Notice that the patterns for C Major are exactly the same as A Major. You can move the 5 patterns all over the fretboard to be in a any new key. The new key name will always be the note under your second finger of pattern 1.

All Major scales have a matching minor scale that use the same notes. For this reason they are called the relative minor.

The root note for the minor scale is always 3 frets behind the root note of the major scale.

Learn how to play guitar scales

By now you should see that splitting up the Major scale into smaller easier to learn chunks is the best way to memorize the scales. The best advice I can give you now is to practice the patterns until you have mastered them. In future lessons I will show you even more cool guitar tricks that will require you to know how to play these patterns. Until the next lesson...keep practicing and be sure to subscribe to get updates.