If you are serious about learning to play guitar, you really need to learn the notes of the guitar fretboard a.k.a guitar string notes. There is no way around it. In this article I will show you some easy ways to memorize the notes of the fretboard. 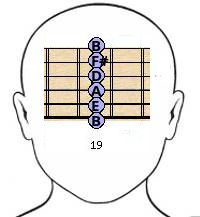 6 reasons why you should learn the fretboard notes.

1) You will know exactly where you are on the fretboard at all times as well as what each note sounds like by name which will help you to learn to play songs by ear!

2) It makes learning how to "see" and build guitar chords on the guitar neck so much easier.

3) It helps you learn to understand scales and keys.

6) Your creative process will not be interrupted by trying to figure out note relationships.

How to memorize the guitar string notes / fretboard

Now that you know why you should learn the notes on the fretboard, lets see just how to go about doing it.

Chromatic scale animation with Sharps (#s) and Flats (b)

Below is an animation of the chromatic scale that switches (3 seconds) between both sharps and flats in standard tuning.

The chromatic scale looks pretty daunting to learn but luckily you don't have to learn it all at once. All you have to do is learn the positions of individual notes which we will do next.

Memorizing the notes - the Promise

You want to know what note is under your finger at any given time no matter how fast you put it there right? I know what I am about to say next is going sting a little. But bare with me because it will pay off.

I want you to make yourself a promise. Promise yourself right now that whenever you put your finger on a note/fret you will do these two simple things.

You can say them either aloud or in your head it doesn't matter. But promise yourself you will do this and make it a habit. If you don't know how to tell what fret number you are on, learn that first! (use the numbers at the bottom of my images as a guide).

I know this seems like a tedious task but if you make yourself that promise and stick to it without fail, I can make you this guarantee --- eventually this will become second nature to you so that whenever you play guitar you will instantly know exactly where you are and on which note you are at, without even thinking about it! Even if you are playing at lightning speed!

If you have made yourself a promise/habit to say the note and fret number whenever your fingers touch a fret on the fretboard, you will be ready for this next section of learning 3 universal note patterns to learn individual notes.

Before I explain the universal note patterns I want to give you some helpful tips.

* Every note will repeat itself 12 frets up on the same string! For example: a note on the 1st fret is repeated at the 13th fret.

* Because of the tip above, there can only be a maximum of 3 of the same note on any string (if your guitar has 24 frets). All notes that have a string with the same name have a maximum of 3 notes on the string all others have 2.

* All 12 notes of the chromatic scale use the universal note patterns below. So if you learn it once for one note it will be the same for all notes!

* Use the 6th string (Low E) as your guide for which note to learn next.

Learning the universal note patterns using the A note.

I have named the three note patterns as: Octaves up , Octaves back and Unisons. Lets take a look at each one using the animation below for reference.

Using the A note, Octaves up follows these rules:

* From a note on the sixth string, an octave up is two frets over and down two strings (on the fourth string).

* From the fourth string, an octave up is three frets over and down two strings to the second string.

Octaves back is still going up in pitch but I call it "back" because the direction is going back towards the headstock. Using the A note, Octaves back follows this rule:

* From any note on the 6th string, an octave is 3 strings down and 3 frets back.

Using the A note, Unisons follows this rule:

One last way to help you visualize note names on the guitar is with note triangles. Which can be explained in the below image.

Some people find it easier to learn the notes on the frets that have fretmarkers (dots). This method only requires memorizing 5 different fret groups 0,3,5,7,9. You really only need to learn one half of the neck since the second half is just a repeat of the first.

After memorizing the the notes on the fretmarkers it's easy to learn the other frets by filling in the gaps so to speak. It's simple to deduce what comes before or after a note that you already know on a fretmarker.

Practice the methods above until you know every single note without hesitation. Also dedicate 3-5 days to finding the locations of each note and memorizing/saying the fret numbers it occurs on before moving on to a different note. Find the note say it's name and fret number for all it's locations. Don't worry if after a few weeks you can't recall them. Cycle through them again as part of your practice routine. Instant recall happens if you work hard enough to achieve it.

Don't stick to just one method for learning the fretboard - use them all in combination. If you follow the habit forming promise, tips, and note patterns above, I have no doubt that you soon will be a master of notes of the guitar fretboard. Imagine having your fingers playing as fast as you want all the while your brain knows exactly what notes are being played. Keep at it, You can do it!

If you like this lesson be sure to mention it to your friends on social media or any other way you feel you can in order to help others learn about guitar.