In this first part of a three part series of guitar lessons you will learn all about the theory of chord construction. I will cover basic chord construction of Major, minor and diminished chords that occur naturally in the Major scale. Then in Parts 2 and 3 will cover extended chords which are a little more advanced.

From my experience, people remember what they learn when taught with images. Images also help to make a somewhat boring topic more interesting. With that in mind, the bulk of this lesson is contained in individual slideshow image frames. The frames are then combined to an animated GIF at the bottom of this article so you can save it to your device to view offline.

Prerequisite reading:
I use some terminology in this lesson that may only make sense if you have read these other lessons listed below:
Learn the notes of the fretboard.
How to play guitar scales.
How To Play Guitar Chords For Beginners
Learning Intervals For Guitar
How to play Major and minor scales over the entire fretboard

Building the basic triad using the key of C Major

The easiest way to wrap your head around chord construction is learn it in relation to a scale. Chords are built from scale degrees by stacking other scale tones of certain intervals apart.

To be considered a chord you need at least three different tones. The most basic chord is called the triad (which means consisting of three).

The first tone of the chord is called the root.

Triads, are built by stacking intervals of 3rds above the root.

The Major chord/triad consists of the root and intervals of a Major 3rd and perfect 5th. 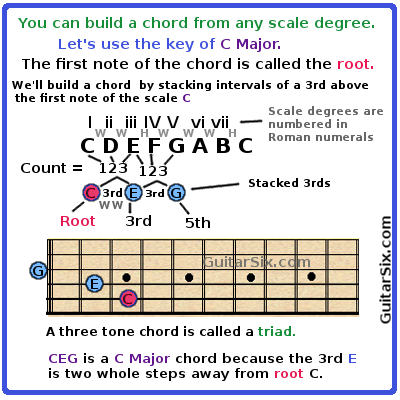 A note about Roman Numerals

Roman numerals are used to indicate a couple important things about chords. Uppercase Roman numerals are for chords that are Major chords. Lowercase is used for minor and diminished chords. It might not seem that important to know right now but later, Roman numerals will give us a handy way to talk about chord progressions without using any notes. As an example: I will be able to say "Play chords I IV V". This will all be explained in a future lesson but just keep it in the back of your mind until we get there.

A minor chord is built the same as a Major with the exception that the first interval of a 3rd is an interval of a minor 3rd. So a minor triad consists of the root, minor 3rd and perfect 5th. 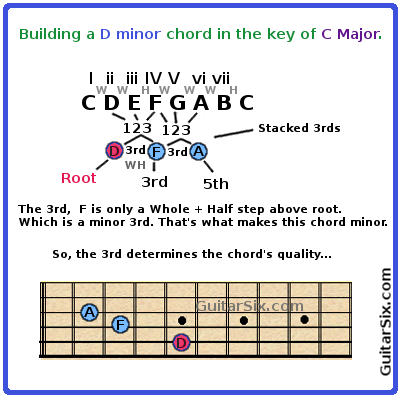 Building chords on each degree of the Major scale

The image below demonstrates building triads from each degree of the C Major scale where each degree is a chord root. 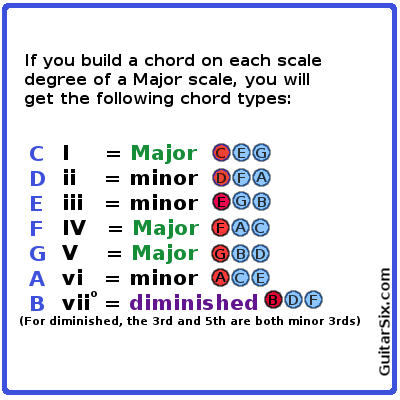 The augmented chord does not exist naturally in the Major scale but you should still know how to build it.

Building chords on each degree of the Relative minor scale 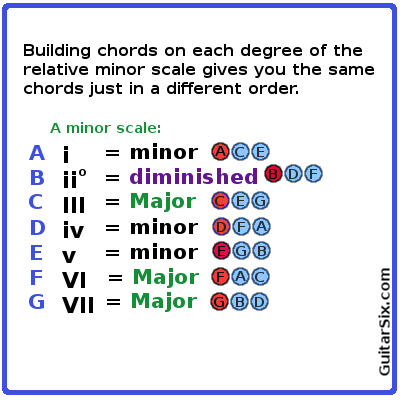 Below are examples of the guitar chords we have learned so far. 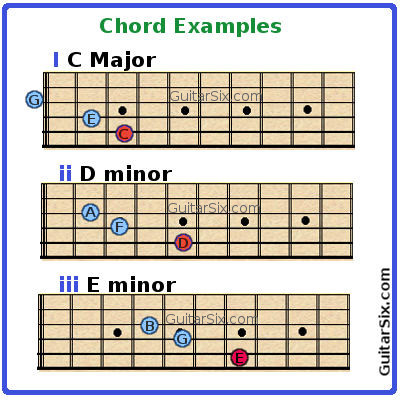 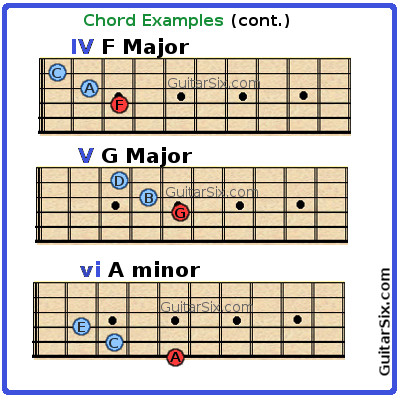 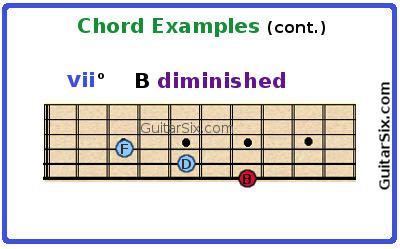 Here is a final GIF animated slideshow of all the instructional frames above so you can save it for later. To save just right click and "save as".

Restart animation (click then scroll down as soon as page loads)

By now you should have a pretty good understanding of how to build the basic chord types that occur naturally in Major/minor scales. In the next lesson we will learn all about triad inversions ad their shapes in The Ultimate Guide to Triad Inversions. Be sure to subscribe below to get notified by email when I post more free guitar lessons.