Time, notes and intervals are the most basic elements of all music. Today's lesson is entirely about unveiling the mystery behind intervals. This lesson is long with tons of information. Be sure to set aside enough time to study it. By the time you finish this lesson, you will know all there is to know about intervals. Grab some coffee and dive in!

What is an interval?

Skip to the bottom of the post for an animated example of intervals on the guitar fretboard.

Why do we need intervals?

The Generic intervals W and H

The distance between each of the notes of the chromatic scale can be described generically as Half or Whole steps. A Half step is the space between the note that is directly next to the previous one. For example from C to C# is a Half step.

A Whole step is two half steps. C to D is an example of a Whole Step.

The chromatic scale C C# D D# E F F# G G# A A# B C starting from C can be thought of as having all Half steps from each note to the next.

On guitar a Whole step in a linear direction is 2 frets away while a Half step is only one. Here is what a whole step and half step look like on guitar:

Names of the Intervals

W and H can be used to describe things quickly. Like saying "Go up a half step or down a Half step. Or "hey, just move 2 whole steps away". But we need another way to describe intervals with more precision. We need precise names so we can use them to build chords! Chords get their names based off of the interval names.

The Interval names are derived from their numeric position in a scale. Given the scale of C Major, which has the notes CDEFGAB - D is the 2nd, E 3rd, F 4th, G 5th, A 6th and B is 7th.

Along with their position, the intervals also have a quality. The quality is determined by the distance. For example C to Db is a minor second. And C to D is a Major second. Major and minor are examples of the type of qualities an interval can have while "2nd" is the numeric position.

Here is a list of the most common interval names along with their Whole and Half step distances. 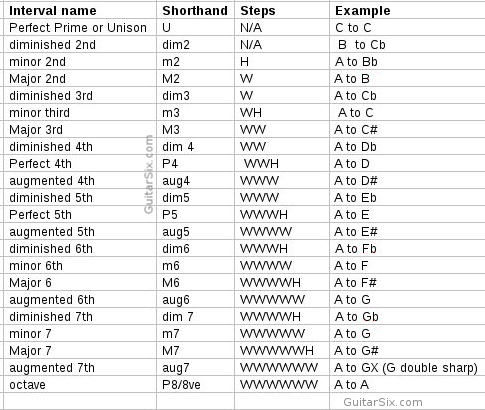 The shorthand symbol is usually used on paper. Some shorthand is also represented as smaller symbols.
Example:
dim = - or °
aug = +

You can alter intervals by widening the space between them. After altering an inverval it will have a new name. Here are the rules to do just that:

* Turn any Major interval into a minor by lowering it a half step.

* Turn any Major interval into an augmented interval by raising it a half step.

* Turn any Perfect interval into a augmented interval by raising it a half step.

* Turn any Perfect interval into a diminished by lowering it a half step.

* Turn any minor interval into a diminished interval by lowering it a half step.

Intervals that span further than the octave are called Compound intervals. Octaves have the same note names but one of the tones is magnitude higher in pitch. For instance B to the next higher pitched B is an octave.

TODO Animated IMG of all intervals


The Interval qualities Major, minor etc. are the same as their non compounded counterparts. However when people use compound interval names to talk about guitar chords, you will rarely hear it's quality called something like "minor 13" or "minor 11th" even though that is what they are. Instead, they are usually referred to as "Flat 13" or "Flat 11". Which means the interval was altered and lowered by a half step. You see this with regular intervals too like "Flat 5" for a diminished 5th.

Inverting an interval means to turn it upside down.

Interval examples on the guitar fretboard

Finally, here is an animated example of what intervals look like on the guitar. While watching the animation, keep in mind that the interval is between/from red to blue. Keep in mind also that these are not the only locations of these examples. Each of the intervals exist in many other locations.

Wow, you have come a long way. I bet you never thought the small space between two notes could hold so much information! If you made it through with a better understanding of intervals congratulate yourself. Now all you need to do is put your knowledge of intervals to good use and use them to build chords!