Learn How To Play The Blues Scale On Guitar

In this lesson we will learn how to play the Blues scale. There are a couple of different Blues scales in existence but we'll learn the one most commonly used for blues guitar. It is an alteration of the 5 tone minor Pentatonic scale which adds one note (called the blue note). This makes it a hexatonic scale meaning it has six tones.

The Blues scale compared to the Pentatonic. 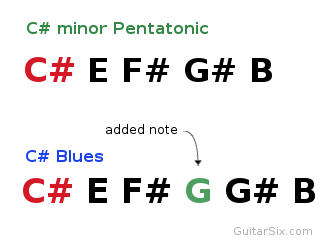 The C# Blues scale is also in the same position and has the same notes as an A Major scale minus the A and D and with added G (blue note).

If you have been following my other guitar scale lessons, then you'll know that the easiest way to learn to play a scale all over the guitar neck is by slicing it up into five smaller more manageable chunks. Below is a GIF animation that shows you how to do just that. The animation also shows you suggested fingerings as well as picking.

* Memorize each of the five patterns individually before moving to the next.
* The notes that fall outside of the 5 boxes are repeats. So where Box pattern 5 ends, box 1 repeats. Also right before box pattern 1 begins, pattern 5 ends.
* As you play the Blues scale patterns try to visualize how they each differ from the Pentatonic scale patterns.

After watching the GIF above at least once, use this guitar TAB below to learn the scale at your own pace. 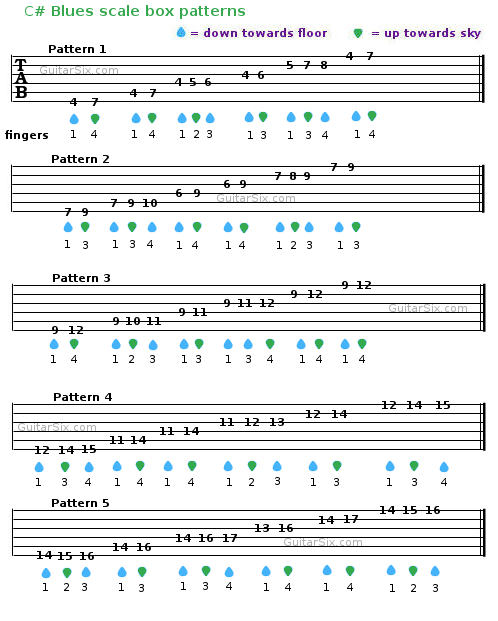 Moving the scale to new keys

Moving to new keys is just as easy as sliding all five patterns as a whole to a any position on the fretboard. The new key name will be the same name as the root notes (depicted in red in the animation).

The Blues scale should be a fairly easy scale for you to add to your arsenal because of how similar it is to the Pentatonic scales. With just a little extra effort you should be able to easily have this scale committed to memory.

I'll be writing more lessons about other scales that are just as easy Learn . So be sure to subscribe below to get notified when I publish them.