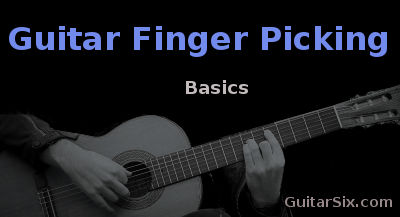 There are many ways to use the fingers to pluck the strings of the guitar. We collectively refer to all these different ways as finger picking or fingerstyle guitar.

Learning finger picking has some cool benefits such as:


* No need to carry guitar picks!
* Achieve cleaner tone with no pick noise.
* Allows you to play multiple lines/strings at once which means
you can play a bass line and melody at the same time. 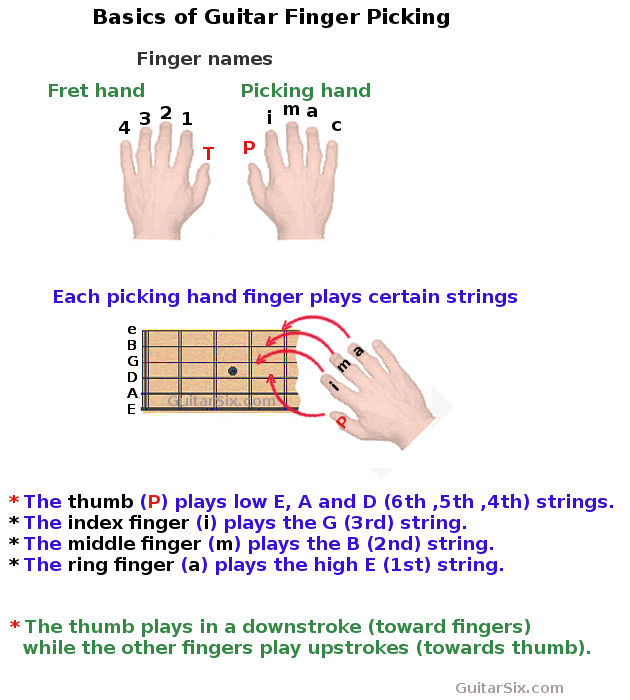 Here is a list of some basic finger picking patterns in TABs. I purposely tried to keep the list small with just enough examples to get you started. So, it's not a complete list of every pattern out there. I did so because I don't want you to feel intimidated. Many more advanced patterns exist especially for certain styles of music. Some music styles have strict finger picking rules so be sure to do your research when you feel you are ready. You can, of course experiment and create your own patterns too.

Basic melody line on the treble strings. Fingers look like they are walking along the strings.

In this example, the thumb plays the bass line while the other fingers play melody on adjacent strings. This pattern can also be used with the fingers playing a single string for tremolo effect.

This is a way of playing a melody line on the lower strings using the thumb and middle finger.

Sweep style picking where each finger plays a string in ascending order then descending.

1. Stay relaxed and take breaks before pain or fatigue set in.
2. The more you practice the more skill, hand strength and control you will build.
3. Unless you are trying to become a classical guitarist, don't be afraid to experiment and find what works best for you.
4. Experiment plucking strings with your finger nails of your picking hand for cleaner tone production.

Hybrid picking is a way of picking using both a pick and the fingers at the same time. When hybrid picking, you hold the guitar pick between the thumb and index finger to pick some strings and the rest of the fingers are free to pluck the other strings. Sometimes hybrid pickers use a special thumb pick that you wear on the your thumb instead of a normal guitar plectrum.

I'm not an expert in hybrid picking so I can't really tell you too much more about it. I just want you to know the technique exists so that you can experiment or look into it further if you are interested.

That covers just about all the basics of finger picking I can think of. If I missed something please let me know. As with other guitar things, practice finger picking until it becomes second nature to you and most of all have fun!