How To Read Guitar Chord Charts

Learning how to read guitar chord charts can be confusing for beginners due to the many different styles of diagrams used in books, posters and on the Internet. So many in fact that it can get confusing trying to understand what's what. The cause of so many different styles of chord diagrams is due to the plethora of information that can be conveyed. Since there is no set standard as to how chord charts are drawn, I thought it would be a good idea to write an article about how to read the most common elements and symbols used in most diagrams.

First I'll explain the types of diagrams I use here at GuitarSix (see guitar chord chart for an example). Then I'll go over some of the many variations you are likely to see out in the wild.

What are guitar chord charts?

Chord charts are visual representations of guitar chords that show you the notes you are to play.

The chord charts I use here at GuitarSix

I layout chord charts for right handed players because they are the majority. Charts are positioned as if the neck of the guitar is laying on your lap in the same direction as your normal right hand playing direction. I do this because it is the most logical way to look at the guitar. It's same as if you are holding the guitar for play and looking downward.

Other types of chord chart layouts

Here are a few other chord chart layouts you are likely to see used in books and around the Internet. 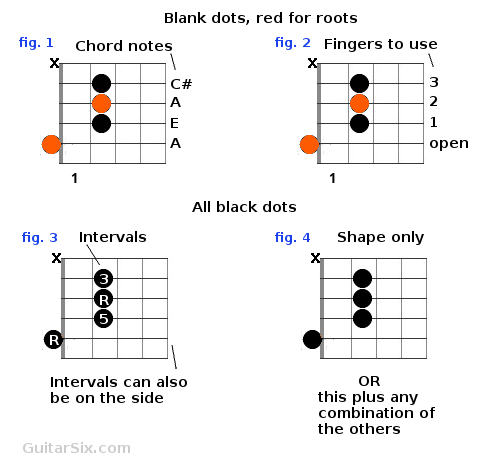 You'll also see many chord charts in the vertical position. Vertical chord charts are situated as if you were holding the guitar out in front and facing you. If you were to follow the arrow in the picture below, it would lead you to the body of the guitar. 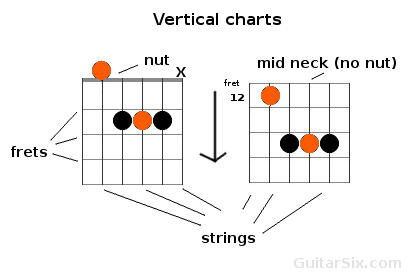 Guitar chord charts over the staff in sheet music or TAB are almost always the vertical type. They are pretty small too. Notice the open notes are hollow and not solid filled. 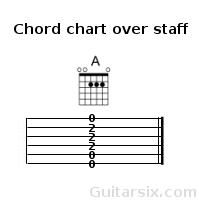 You might find yourself needing to write down some chord charts. Coloring in chord charts with dots and notes can be great practice. Head on over to blank chord chart paper to print your own blank sheets. (See below for left handed paper)

I know it's not fair to you lefties out there but most the chord charts you will ever come across are for right handed guitarists. As a left handed player, you are going to have to adapt and transpose right hand diagrams of the songs you like. The good news is, all that transposing will make you smarter! I encourage you to do it as much as you can. You will be a better guitarist because of it. I made some printable left handed guitar chord chart paper to get you started.

I bet you are looking for some guitar chords to read right about now. If so, check out my free guitar chord books section. I'll be sharing even more free books there in the near future. Be sure to bookmark that section or subscribe below to be notified when I release those new books. Happy chord reading!