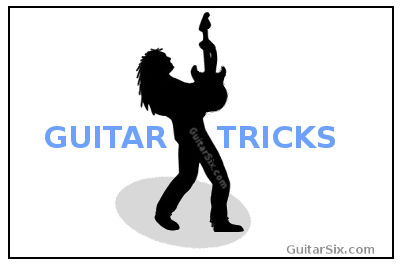 Adding guitar tricks to your playing will spice up your sound. Whether you play Rock, Metal or Jazz, there are some nifty ways you can get some pretty strange noises from your electric or acoustic guitar. From bleeps and blips to thunderous helicopter sounds and animal growls, this article will show how to squeeze those cool sounds from your guitar like a rockstar. 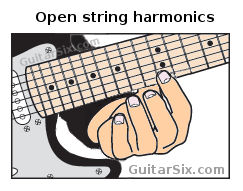 Open string harmonics have a nice chime or bell like sound. To play an open string harmonic, lightly rest the tip of your finger on a string just above a fret wire without actually pressing down, then pick the string. It may take a couple of tries at first but when you succeed the harmonic is on mistakable. The easiest frets to sound an open string harmonic are 5,7,12 on every string but every fret has them if you hit it just right. You can also learn how to tune a guitar using harmonics.

* Harmonic Flurry - You can sound a fast flurry of open string harmonics by sliding your finger up and down neck while picking fast. The trick here is to keep your sliding finger lightly touching the string instead of pushing it down.

* Pull off harmonic - Pull off harmonics are used frequently in Rock and Metal. Achieving one is a two step process where you first pull off to an open string with first finger then quickly touch the harmonic at around the 3rd of 4th fret. The result is a high pitched harmonic. This trick works best on the 3rd string. Add a whammy bar dive bomb for maximum effect and sustain.

* Tapped harmonics - Holding a chord shape with the fretting hand then tapping the strings with the fingers of the picking hand near the sound hole or electric guitar pickups makes for some interesting harp like harmonics.

* String squeak - String squeaks usually happen on accident between chord changes but there may be times when you want to make a string squeak on purpose. To squeak, let your fretting hand lightly rest on the strings and then gently move it up or down the neck without pushing the strings down. This sounds best when done on an acoustic guitar. 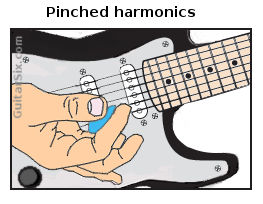 Pinched harmonics are achieved by letting some of the skin of your picking hand touch to the guitar string during or immediately after picking. I personally feel it's easier to pinch harmonics using my index finger but others prefer using the thumb. You'll have to explore a little to find the best spot where pinching a harmonic is most likely to occur. Be warned, pinching harmonics is addictive. Once you find that sweet spot you will most likely make your guitar squeal for days while you perfect the technique. 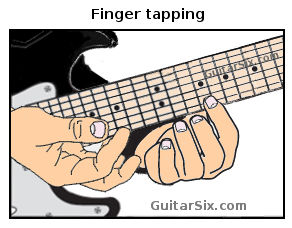 * Finger tapping - Made popular by Eddie Van Halen (listen to Eruption), finger tapping is one of the easiest guitar tricks to learn that will make you sound like you are playing something totally complex even though you are not. To finger tap, use a finger of your guitar picking hand to play notes on the fretboard by pressing notes down then pulling them off to notes of the fretting hand. It's common to use the middle finger for tapping so that you can keep a hold of the guitar pick.

* Tap and drag and slide - Tapping and sliding works the same as finger tapping with the addition of sliding the tapped notes up or down the neck before releasing them. 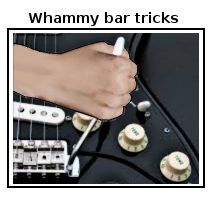 * Whammy bar flutter - You can make a fluttery sound by releasing the whammy bar and letting the springs bounce back into place while sounding a note. 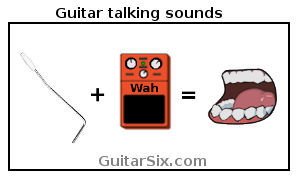 * Make your guitar talk - With a little practice, a whammy bar and a wah wah effect pedal you can make your guitar talk by simulating voices. The trick here is to start with the whammy bar depressed and raise it up while fretting notes and sliding to other notes. Try making words by alternating between depressing and releasing the bar during note changes. The wah wah pedal (or a phaser pedal) helps to give it this trick a more vocal sound.

* Whammy slide - Whammy fretting hand notes as you slide them up and down the neck.

* Pick tapping - Like finger tapping above but using the pick to hammer onto the strings. 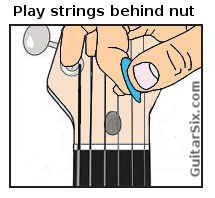 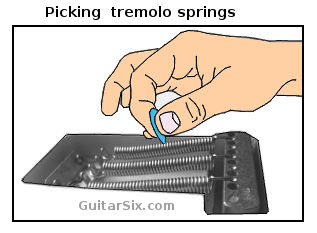 * Tremolo Springs Picking - Use your guitar pick to scrape the tremolo springs in the back of your guitar (with cover removed if your guitar has them). Turn up amp volume for this trick.

* Pick tap pickups - Create various clicks and clanks by hitting or scraping your electric guitar pickups with your pick. 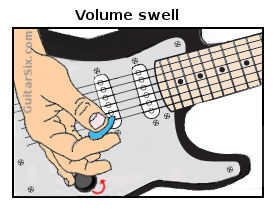 * Volume swells - Create violin like sound effects using volume swells by playing notes while simultaneously turning your guitar's volume knob from zero to 10 and back using the pinky of your picking hand.

* Rapid on off switch - If you have an on off switch or a kill switch installed on your electric guitar, you can activate it repeatedly so that the sound cuts in and out for a machine gun like effect. 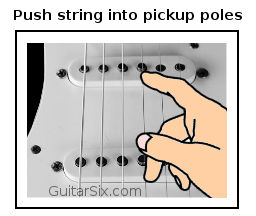 * Push strings into pickups - Pushing a string/s into the magnetic poles of the pickups makes fun space age sounding bleeps and blips.

* Jack sting - For electric guitars, with amp on, unplug 1/4 cable from jack and touch it to the jack plate or anything else metal for a cool electric buzzing sound.

* Electric guitar feedback - Feedback is usually an unwanted noise that happens when when your guitar amp is to loud but you can use it to your advantage. Try adding whammy bar dives during feedback or on off toggle switches with it to make interesting beep sounds.

* Pickup yell - Make unique vocal sounds by yelling into your guitar pickups while the amp is turned up to a high volume.

* Right and left hand muting - Muting creates a percussive effect. Muting means to deaden the strings slightly by resting your hands or fingers on the strings while strumming.

* Body thump - works best at loud volume on electric guitars - punch guitar body with meat side of your fist.

* Percussive body slaps and taps - Make various percussive and drum like sounds between chord strums by slapping your palm or fingers of your picking hand on an acoustic guitar body. Percussive slaps simulate the sounds similar to bongo and other small drums. 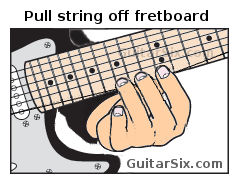 * Detune dive bomb - A.K.A. Poor man's dive bomb. On guitars with non locking string nuts, you can simulate a dive bomb by turning the tuning key of the low E string down while the note is ringing. This trick is great when used on hard tail bridge guitars with no floating tremolos. You'll have to know how to tune a guitar by ear if you intend to use this trick frequently.

* Play faster - Increase your picking speed and play faster runs by angling your pick so that it glides off the string easier. See how to play guitar fast for more tips.

* Visualization - Learn faster by using visualization techniques. In other words, see yourself / imagine yourself doing what you want to be able to do. Try to recreate the images of you completing a recent guitar lesson you have had or a guitar related task in your mind as clearly as possible. Visualization is proven to increase the time it takes to learn a subject because it tricks your brain into thinking it already knows how to do things.

* Become a guitar scales wizard - Learn the tricks to help you easily memorize and remember guitar scales all across the guitar fretboard.

* Become a master at guitar chord triads - Learn the tricks to help you master the shapes of chord triads all over guitar fretboard.

* Memorize the notes of the guitar fretboard

* Guitar TABs - Create your own library of guitar tricks and licks. Save everything you do by writing them down as a guitar TABs.

* Experiment - How many guitar tricks are out there waiting for you to find? Be sure to explore your guitar and find other cool tricks. If you find any or think I missed a trick that should be listed, feel free to share them with me. If you submit a trick I can use, I'll give your credit by name or link if you wish!