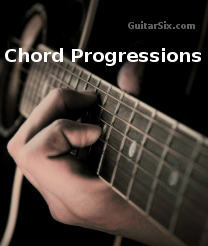 What are chord progressions? 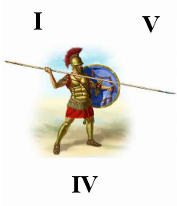 In order to talk about progressions you have to know your Roman Numerals. The Roman Numeral System is a simple system of identifying chords in terms of their position on a scale degree (see scales). It is commonly used to discuss chords and chord progressions. Only Roman Numerals 1-7 are used For example: I, II, III, IV, V, VI, VII.

Uppercase Roman numerals are for chords that are Major chords. Lowercase is used for minor and diminished chords. The table below should clarify what the actual numbers are and what the scale degree is that they represent.

The seven Roman Numerals and their respective scale degrees are:


A Roman numeral applied to each of the seven diatonic scale degrees offers the reader a visual indication of not only it's position but also the type of chord. The Roman Numerals can also be combined with other symbols as well to help better describe the chord (as you will see later).

Pictured below are the triads built on each degree of a C Major scale and numbered with Roman numerals.

Or a more graphical representation.... 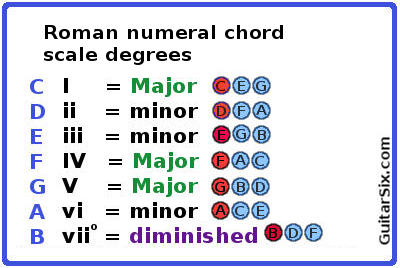 In the graphic above you can see that each chord built on a particular scale degree is now numbered with an upper or lower case Roman numeral. Again, upper case numerals represent Major chords and lower case for all the other chord types. It's easy to remember what degree has what type Roman numeral due to the fact that there are only three Major chords in a Major scale and that they fall on the I, IV and V positions. So they are all upper case. All chords on the remaining scale degrees use lower case Roman numerals. The I IV V chord progression, is also one of the most basic chord progressions used in Rock music which you will learn more about later.

Notice that the Major and it's relative minor scales have the same exact chords. The numbers are in a different order based on their position in the respective scale.

The music theory names for the Roman Numeral chord positions

You could live your whole guitar life not ever knowing this next bit of information. I just put it here for those that may be interested. You can safely skip to the next section if you want. Anyway, in music theory, each chord built on a specific scale degree also has a name and a type. Types follow the name and are "primary" for uppercase Roman Numerals or "secondary" for lower case. See below in the key of C and A minor.

= B Subtonic or Leading Tone (secondary)

Key of A minor (relative minor)

Chords that are primary, the I(i), IV(iv) and V(v) are called primary due to their importance in tonal harmony.

Now that you have some knowledge of the Roman Numeral System under your belt, we can use them as symbols to represent chords in chord progressions.

Since a chord progression is simply the movement from one chord to another in a series of chords the combinations are almost endless. It is impossible to list every type of chord progression. We can however, cover some of the more common progressions. 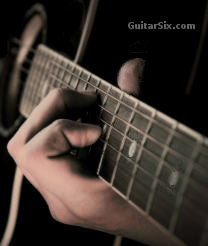 The I IV V I progression is so common that that we will cover it first in the key of C.

In the key of C Major if we take the I, IV, V, I chords we would get three major chords ordered like:

Many songs have been written using this progression or variations of it due to 1) it's very basic and effective nature and 2) it's strong resolution to the Tonic (I) of the scale which gives a definite tonal focus and establishment of key. The strong resolution is caused by the move from the V chord back to the I which is called a "Perfect" cadence.

A progression from the IV chord to I chord is known as a plagal cadence and it too is used in many popular songs.

Here are some more basic chord progression examples that use open position chords to get you started. 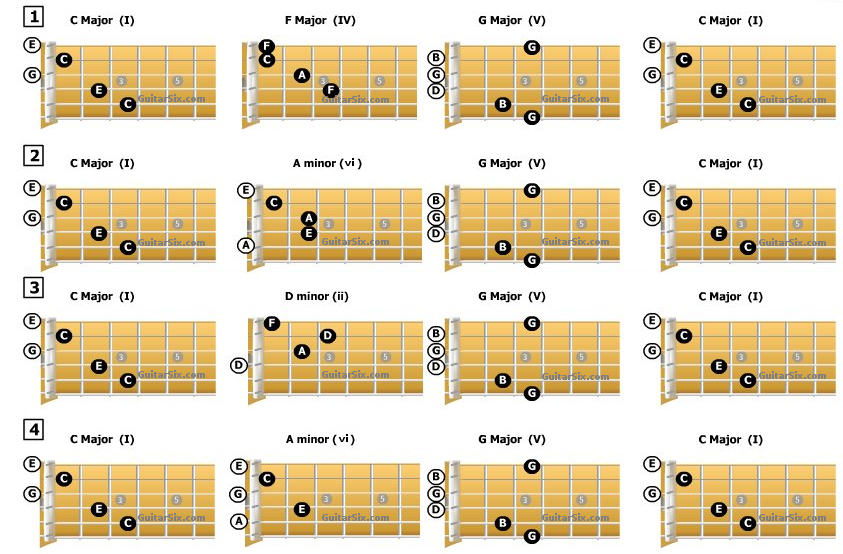 Like I said before, there are endless possibilities of progressions but here is a list of more to try. Try them in different keys as well as minor keys too.

If you have read this far then you really should read this music theory book. This is an affiliate link so buying this book through this link actually helps me earn money to help with the cost of running this site and keeping it free. Anyway click this book cover to check it out. 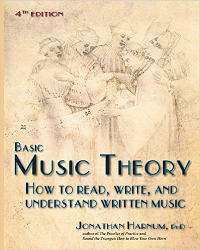 I read this book. Read the reviews on Amazon and judge for yourself.