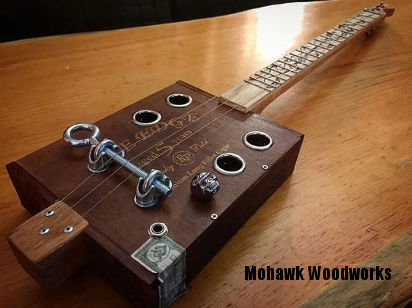 If you have never seen a cigar box guitar, when you do you will inevitably want one. But where to begin? There is plenty to consider when choosing to get into cigar box guitars.

The cigar box guitar world is founded on the idea of building your own low cost instrument out of whatever is available. Not everyone is gifted with the ability to create though. So a major decision is whether to build or buy. Building these instruments is not difficult.

There are no real rules as to how to put them together though plenty of useful information can be found to help you along. There is also the reward of knowing that the instrument you're playing was hand crafted by you!

The other option is simply to buy an instrument. They can range from under one hundred dollars to over one thousand. There are also dozens of makers who will either have offerings pre made or can build to your specifications.

Traditionally, the cigar box guitar is an unfretted instrument. The early ones did not even have fret markers. Modern cigar box guitars usually have some form of fret mark. So playing slide is fun and easy because there is a visual reference on the fret board.

There are also guitars built with fretting just like a traditional guitar would have. This may be an easier option for someone who already plays guitar. Depending on the string set up chords and notes can be played on these in conjunction with slide to create great sounds.

There are many string configurations to choose from when selecting a cigar box guitar. Arguably the original is the one string didley bow. One string plays both a drone note and lead parts with a slide. The two string is similar to a didley bow except the lower string is the drone and the lead parts are played on the high string.

Next up are the three and four stringed guitars. The three string is the standard for cigar box guitar and is typically tuned open G for simplicity of playing. There are a myriad of other tunings to experiment with. The four string is similar with an additional high string. It offers a little more choice in tuning and a fuller sound. Last but not least is the 6 string option. This set up gives you a fully functional guitar the plays just like a standard guitar would. There are other more bizarre string combinations but for the purpose of getting into playing the cigar box guitar these really are not useful.

Finally you need to decide whether you will be playing acoustic or electric. Cigar box guitars in their simplest form are merely a box with a sound hoe and can be played without amplification. However, with the addition of a pickup they can be plugged in and offer a variety of tones. The simplest pickup is a piezo. these work based on the vibrations of the box and strings. They can be noisy and pick up every bump against the instrument but have a great natural sound.

Magnetic coil pickups are the other option. They are available in all the standard set ups you see on regular electric guitars. Often they are scavenged from old or broken guitars to begin with.

Hopefully these four considerations will help you hone in on your first cigar box guitar. Be warned though, it becomes an addiction and nobody can own just one!