How To Read Music A Beginners Guide 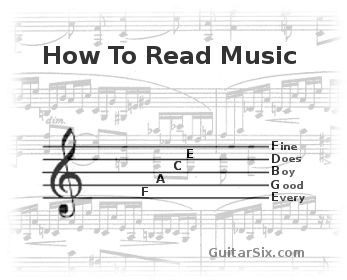 Reading music is one of my favorite things to do. It is really amazing how much insight you can gain about how music works just by reading dots on a page.

In this article I will teach you the fundamental concepts you need to know in order to learn how to read music. Also included at the end of the lesson is a handy visual aid you can use to relate the guitar string notes to the notes in a music staff. Like anything else in music, it takes practice to become a skilled reader of music scores. This lesson will teach you enough so that you can see how easy it is to get started.

See also: Guitar Scales and How to read TAB.

Why should you learn to read music?

Vast quantities of music have been written down for the last few hundred years so being able to read music is an essential skill for any musician. Here are a few reason why learning to read music is a good thing.

* Learning how to read music can give you a deeper understanding and appreciation of music.
* The ability to read music also lets you communicate music in some other form besides sound.
* Written music becomes transferable digitally or on paper which makes it a great way to archive it or share it with others, who can then learn from it.
* Scientists now say learning music actually helps to make you smarter!

Generally speaking, sound is ordered or un-ordered vibrations that occur in waves caused by a disruption of space. Vibrations are are made either mechanically (a guitar string ) or organically (a vocal chord or tree falling) that travels through any type of matter. They can be heard or measured as having a certain frequency. Noise on the other hand would be unordered vibrations with no particular lasting frequency to be measured.

The most common form of matter through which sound travels is air. It can then be measured by an instrument of some sort, most commonly by the human ear.

Sound can be categorized and named by it's high or low frequency which is it's pitch. Pitch is measured in Hz (Hertz).

For example A440, is the reference pitch used to tune a guitar to standard concert pitch. The 440 means 440 Hz or 440 cycles per second. Currently we call this pitch "A" but that wasn't always the case. At other times in history it was named as A 420 or similar. In other words, when we say 440, we are saying the pitch at frequency 440 is an A.

When a frequency is doubled or halved, it still has the same letter name. A doubled frequency rate causes a higher sounding pitch, while a lower one (one that is halved) causes a lower sounding pitch. Measuring pitch in Hertz is beyond the scope of this lesson, however, it is important to know that it has been standardized and that all the sounds we use in music today have a name and a pitch which can occur in numerous varieties of high and low.

The Basics of Music Notation

So the musical alphabet is really a mixture of the letters A - G and the symbols # and b. We can organize groups of pitch step wise into scales and groups called chords.

Music is written on a series of five lines and four spaces that is called a staff. Notes are named after the line or space that is written on within the staff.

Clefs are placed at the beginning of a staff and give the reader a visual clue as to the range of pitch being used for the piece of music. Every instrument has a particular range which can be one of treble, bass, alto, or tenor. The guitar is a treble instrument and uses the treble clef, also called the "G clef", because the bottom curl of the clef wraps around the "G" line of the staff.

Pictured below is the Treble Clef:

The Bass Clef is used for a staff meant for instruments of the low ranges such as the lower left half of a piano, a tuba or bass guitar. It is also called the "F Clef" because the two dots are a visual identifier to where the F line is located. Yes, the Bass clef changes the order of the lines and spaces of the staff and the two dots are placed one above and one below the F line.

Just as it is with the treble clef, every line and space in the bass clef also has an associated letter name.

A musical composition written for both Treble and Bass instruments (piano) are written on a larger staff called a "Grand Staff" which is a combination of both the treble and bass staves (plural for staff). The line and space names do not change but the Grand Staff looks like this:

The line between each staves (plural for staff) is called a ledger line. Ledger lines can occur above or below any staff and act as markers for the placement of notes that occur higher or lower than any of the lines or spaces. On a Grand staff the ledger line in the middle denotes position of Middle C. Where middle C occurs is also the spot in which two more clefs occur. Actually it's two clefs that use the same symbol. They are the Alto and Tenor clefs commonly referred to as the "C Clef". Pictured below is the Alto clef with the Bass clef and Treble clef. To turn the Alto clef into a tenor clef, move it down one line.

Here is the Grand Staff in it's entirety with notes placed and named.

Written music is divided into measures to help the reader keep track of time. On the staff a measure (or bar) is represented by a bar line. All notes fall within a measure.

Music notes are used to represent two things, pitch and duration. In other words, the location a note is placed on the staff gives a note it's pitch. The type of note that is used tells you how long it lasts in beats.

You can keep on dividing note values in half by adding more flags (or beams) to get 32nd, 64th, 128th notes!

The combined value of the notes in a measure will always add up to the top number in the time signature.

A dot after a note increases the note's duration by half of it's original value. So:

The word "meter" is another way of saying "Time Signature". You can say "The meter of this piece of music is four four".

Examples of the most common time signatures:

Silence and the Rests 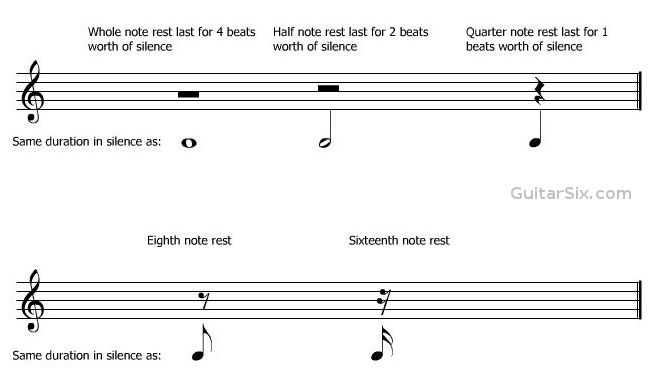 A key signature tells you what key a piece of music is in. The key signature consists of sharps or flats placed in a specific order just after the clef. You can see a complete list of keys in the Circle of 5ths.

Sometimes a piece of music will contain a note outside of a key called an accidental. Even though they are done on purpose they are still called accidentals. Accidentals and they are notated by using # (sharp) b (flat) or a natural symbol.

An accidental lasts for the remainder of a measure unless negated by another accidental symbol.

What is sight reading

Sight reading is the ability to read a piece of written music and play that music on an instrument at the same time. It takes years of practice to learn how to sight read. You don't have to get to that level of expertise to enjoy reading music. Knowing how to read music well enough to help you figure out things on your own can only help you improve as a musician.

Sight reading on the other hand, is a valuable skill to have if you have the time to dedicate learning to do it. Many studio and concert musicians sight read. It's their bread and butter and how they make a living. If that interests you see the graphic below.

How to read music notation to guitar string notes

This color coded graphic shows you how the guitar string notes are notated on the treble clef of the musical staff. Notice that sharps and flats on the guitar necks are black in color. Use these when you look up accidentals or music that uses a key signature. 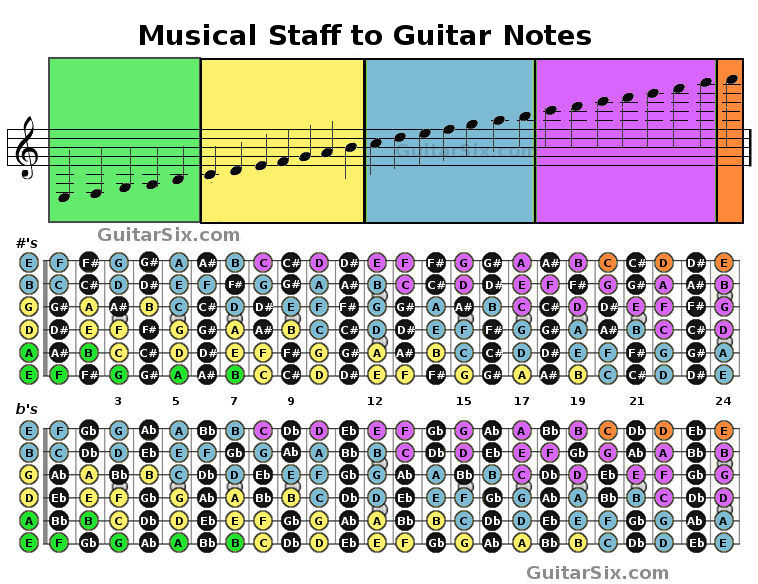 I hope this article has shown you how easy learning to read music can be. I hope it has inspired you to learn how to read music. There is so much more to learn and I hope you find it interesting enough to pursue it further. When I get time I will certainly add more to this article so be sure to check back frequently.